I don’t know why it took Picasso so long, I was painting like a child by the age of five. Maybe, like me, he shouldn’t have bothered with the Raphael stage.

I’m having an existential moment. Having spent most of my life working with technology to make art and creative things, one of the most satisfying works I’ve made recently involved nothing more than cheap poster paint, scrap paper and skills I learned as a child. It’s not so much old-school as pre-school.

A few weeks ago I began an ill-fated new project.

I had a “brilliant” idea to make a satirical Halloween advent calendar. Each day would be a skulls head, stylistically referencing the Mexican Day of the Dead festival as a satire on the commercialization of cultural events. There’s more of an explanation here.

I often use Keynote to make graphics. I know it’s not really a graphics application but it is very fast to work with and acts as a digital sketchbook. Also, it is very useful for making multiples that share common elements. However, as a graphics editor it is lacking some things that I miss from other packages, and I wanted to create more complex graphics.

I am not an illustrator or designer, but I did use both Adobe Illustrator and Corel Draw a lot in the past, and I went looking for something similar. I’ll not bore you with all the options but I found iDraw that works both on Mac OS X 10.6.8 and my iPad running iOS 8.x, and has all the missing features I was looking for; layer control, composite vectors, text on a path amongst others. I’m very impressed with it although it crashes now and again, but that might be related to other problems that I and others are having with what appears to be an unresolved memory management issue with 10.6.8.

On the whole, iDraw is very good, but where I made this project unwieldy is that, as an attempt to extend the social media reach of the project, I decided to screen-record myself creating the graphics in order to show both the conceptual thinking and how I was learning to use the software.

Not really. I didn’t realise at first, but simultaneously screen-recording with QuickTime Player 10.0 on my 1.83GHz Intel Core 2 Duo 2Gb Mac had a major performance hit and made the machine quite sluggish, which I initially blamed on iDraw. Anyway, the graphics took so long to make, that it was impacting on other projects and, after the first batch of four which I made beforehand, I was having to make each one on the day and couldn’t get ahead. I hate that tyranny of having to do something rather than as and when, which is how I usually work. What’s more, the amount of mouse wiggling was aggravating the dormant RSI injury in my right shoulder and neck.

So, reluctantly, I decided to abandon the project on day 10. Sometimes you’ve just got to admit defeat. I could have forced it through but it’s only a minor project anyway and I might complete them in time for Halloween next year.

Here is one of the making-of videos for the first 9 (the graphic for the 10th was incomplete because I hit a snag which was the last straw.

Conceptually sound, but practically inept, and the results are nothing more than okay. I think it will work much better when there is a full set. We’ll see.

Anyway, I have always been a hoarder and I’ve always hated waste. And this is why I am still using a first generation MacBook and why I keep all my spoiled inkjet prints.

Although it took me nearly twenty years to get around to it, the “Stained by Dead Inkjets” series of collages used very old-school, pre-digital techniques, despite the source material being of digital origin. 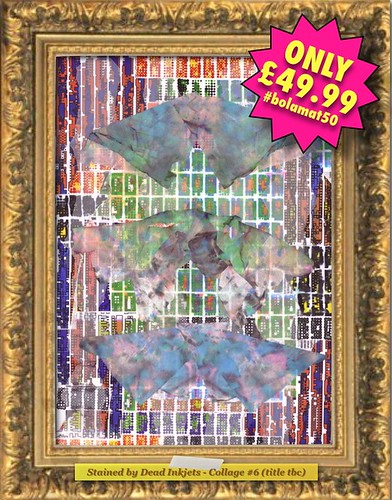 Anyway, as one of my “brilliant” satires, I decided to make my own Day of the Dead decorations rather than buy any of the crap from the shops. I’m not keen on the horror theme of Halloween and I think the Day of the Dead celebration is much more positive. I experimented with a few ideas, and my favourite is these faces, made very simply by folding and cutting scrap paper. Then I painted a base colour, allowing the colours to cross-contaminate, Rorschach-blotted them and voila!

What’s more, the back of it is even better than the front.

I like them far more than the highly-conceptualized Halloween advent calendar that I had spent so much time on, and (not including drying time) these took a few minutes each. It’s only take all my life to learn that.

“Every child is an artist. The problem is how to remain an artist once we grow up.” – Pablo Picasso